Although Kylie Jenner brought these waffle bites to everybody’s attention, busy mom’s have been making them forever. Tasty, easy, and fast… nothing beats the ease of throwing prepared cinnamon roll dough into the waffle maker and a couple minutes later having a fun breakfast the whole family loves!

These little waffle bites are a great recipe for getting your Kids in the Kitchen trying their hand and making meals! Make sure you supervise their use of the waffle iron, though.

Be sure that the cinnamon rolls don’t burn. I found that they can go from golden brown to burnt quite quickly so be sure to keep an eye on them.

Oh my gosh are these amazing for making and freezing for later! Make up a big ol’ batch and pop them into a freezer bag. Take a couple out and reheat them in the toaster. Easy and fast weekday on-the-go breakfast! 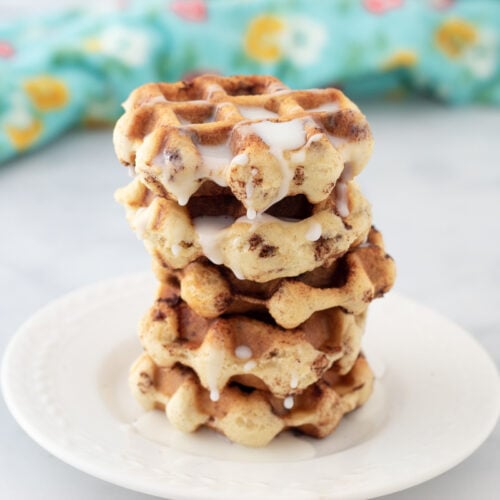 SaveSaved! Print Pin
No ratings yet

To make icing pourable, you can use the icing in the can and just add a small amount of hot water and stir. This makes it easy to pour the icing straight onto the cinnamon roll waffles.
You can also mix powdered sugar with milk to create more icing for your waffles.
A bit of syrup add tastes great! And of course you can top with fruit if desired.
You can also batch cook these and freeze. Then simply pop already made waffles into the toaster for an easy on the go breakfast.