These cinnamon rolls are in partnership with Rhodes Bake N Serv, a favorite product of our family.

Rhodes cinnamon rolls are a quintessential American breakfast treat. We’ll walk you through the steps for a homemade batch of sweet, gooey rolls.

These are the easiest, homemade cinnamon rolls (do you eat cinnamon rolls with your venison chili like we do?--some think it's strange) you can make! No-yeast, made with frozen Rhodes bread dough...they are a quick and simple breakfast recipe perfect for special days (we have them for Christmas morning!) and easy enough for your busy schedule.

I'm sure your family is similar to mine in their love for pastries on lazy weekend mornings. Mine adore all of those gluten-filled, high-calorie, time-intensive treats like scones, filled donuts, tarts, and of course...cinnamon rolls. Most weekend mornings I am not fond of being the one to get off the lazy train and be productive while everyone sits around cuddling and watching morning cartoons. So, I just don't. Cereal it is!

My mom didn't really make homemade anything. I'm guessing being a mom of 10 kids made time a bit of a challenge.⁠
⁠
I was 16 when I slept over at a friend's home (this was a VERY BIG DEAL in our home!) and I woke up and wandered upstairs to find my friend's mom making homemade cinnamon rolls. ⁠
⁠
I was in awe. And thought she was obviously the best cook that ever existed.⁠
⁠
When I started learning to cook, one of the first things I learned was how to make the very same cinnamon rolls she made.⁠
⁠
From frozen bread, cinnamon, sugar, butter, and a secret ingredient I remembered that superhero mom telling my 16-year-old self...vanilla pudding.⁠
⁠
I have few memories as a child, but I have a distinct memory of her sprinkling vanilla pudding all over those rolls and whispering to me..."don't tell, this is my secret ingredient". ⁠
⁠
There is a little guilt in telling the secret. But honestly, those few times I spent at her home went into the bank of amazing memories for my childhood. I don't think she will mind.⁠
⁠
And these frozen bread dough cinnamon rolls, although not truly homemade (try telling me that at 16...ANYTHING not from a can or jar was homemade, to me), they will always beat the regular method.⁠

But these cinnamon rolls are so easy, so fast, and so tasty that Levi or Katie will ask on a Friday night if they can make them the next morning. They have made them enough times to know that the dough needs to be taken out the night before they want them or they are flat out of luck. As long as they're prepared properly the next morning the two of them can be found side by side baking up a batch of quick cinnamon rolls.

Do you want world peace? Have kids? Love your weekend lazy mornings? Want to be a better mom? --> try these rolls!

Even for this quick cinnamon rolls recipe, you will need to be like my kids and one day ahead of the actual cinnamon roll making day. ---be sure to get that frozen bread dough out the night before. If you forget, there is a quick thaw option (check the package) that takes a few hours.

We recommend taking a frozen roll of Rhodes out of the freezer the night before and just leaving it in the refrigerator overnight to defrost and start the process.  Then you'll be set to roll it out the next day.

If you find yourself having difficulty with your dough rolling out, let it rest a couple of minutes and come back to it. You'll find it much easier to roll.

I'm a big fan of brown sugar in this recipe but white sugar is a great option, too. You'll find using brown sugar gives the rolls a more caramel taste and texture while white sugar will keep your rolls more like a traditional cinnamon roll.

To get your cinnamon rolls to roll up nicely, I find it easier to use an icing smoother or a long scraper to help pickup my dough off the surface cleanly.

To cut your cinnamon rolls without squishing them use a fishing line or a serrated knife is your best choice if you want perfectly round little rolls straight away. I just slice them and give them a bit of their shape back before putting them on the pan.

I prefer to use a round pan to get the traditional bundle of rolls but, as you can see here, I also like using cookie sheets when making a large number of rolls. This recipe makes about a dozen and works well for a cookie sheet or 9x13 pan. For a speedy cleanup use a disposable aluminum pan.

These are not completely homemade. But using Rhodes Bake N Serv keeps them quick and easy! To be a better mom, sometimes I need quick and easy. These fit the bill. And are delicious, too.

My grandma made the best homemade cinnamon rolls. The from scratch version. And these come really close to as good as here is a fraction of the time!

And how do you argue with that?

You don't. You just sit on the couch, with your hot coffee, under the blanket, watching cartoons, and smiling at your genius children enjoying "homemade" cinnamon rolls. Knowing full well that your "good mom" ranking crept up while they weren't paying attention! 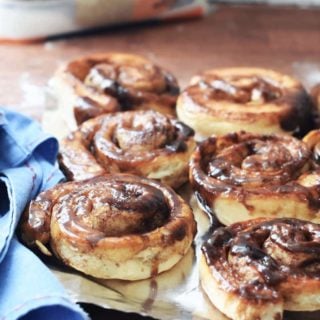 Don't forget to give your bread time to thaw. Put the frozen bread in the fridge the night before and it will be ready to go in the morning.