From my Minnesota kitchen, this authentic Swedish Meatballs recipe is easy to make and BETTER than the IKEA version. A traditional family favorite!

Ole and Lena were eating dinner when Ole yelped and exclaimed..."Lena, vat did ya put in da food, it's dam spicy!". Lena said "Dat neighbor down da street gave me something and told me it would make da food da best food we ever had. Cripes, I knew he vas no good." Ole..." What vas da spice?". Lena..."Pepper."

And that, my dear friends, sums up the whole spice profile of Swedish cooking. Okay, so there IS pepper and salt used in Swedish recipes. But that's about all the spices good, traditional Swedish recipes have. They tend to be very bland by most other cuisine standards.

How do I know this? Well, I worked in a local cafe for quite sometime as a teenager in a MN town called Mora.  Mora is all things Swedish. Mora is the home of a gigantic Dala horse, and a Mora clock commemorating the town's Swedish roots. Mora's sister city and namesake is Mora, Sweden. Mora DOES Swedish. And that little local cafe I worked at knew how to cater to its locals! Which meant it knew Swedish dishes inside and out.

At that cafe, I learned how to make many a Swedish recipe. Yes, even lutefisk. Gah!! Try getting that smell out of your clothes!

Note: traditional Swedish Meatballs require grated, minced, or finely chopped onion. My kids laugh at me when I'm sitting and grating onion. But, it's totally worth it!

AND...AND...Nate is ¼ Swedish. I remember when we first married and I met his great-uncles Raymond and Russell. They were 100% Swedish, spoke Swedish, cooked Swedish, and one was dressed in overalls every time you saw him. And they were huge, tall men. Nate's grandpa and these great uncles were children of Swedish immigrants.

Quite a few years back Nate's great-uncle was becoming too elderly to stay in his home by himself and wanted to clean out some of his belongings. I was utterly thrilled to be able to get one of the trunks that traveled with the family on the boat from Sweden. That, along with an original Swedish hymnal and Bible are treasures in our home. The stories and history those items have must be incredible!

Nate's parents stick to meat and potatoes, salt & pepper as the only spices, and lots of cream in their dishes. Standard Swedish cooking. I am often looking for the salt and pepper shakers when we are at their home for dinner. The Swedish roots are strong with those two :).

Swedish Meatballs have their roots as leftovers. No really, it's true! The meat came from whatever scraps of meat and fat were leftover from the week, and then ground. Which is why Swedish Meatball recipes feature a blend of multiple meats. Onions were readily available because of the ease of storing them in the winter. Breadcrumbs were the leftover pieces of bread that had become stale or not used. And cream? Well, what is a Swede without good cream?

Truly, Swedish Meatballs are the ultimate in leftover use!

Why did they cook them in a pan, on the stovetop, you wonder? Well, I'm thinking that they weren't terribly concerned about perfect ball shapes for their leftovers. AND...ovens. Yeah, they weren't quite as available, in that time, as a plain ol' fire or cooktop.

Traditionally, Swedish meatballs use the scrapings of the pan with a bit of cream and flour added to create the gravy that you pour on them. And, of course...serve with mashed potatoes and lingonberries.

This is a larger recipe because...leftovers! I make this large batch and freeze about ½ for a later meal. Soooo good! 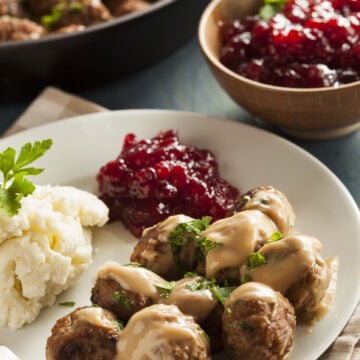 Many recipes for traditional Swedish Meatballs call for white pepper. Try using white pepper in place of black. Use your hands for mixing the meat...don't over mix!