A flaky pie crust made in the food processor with butter and lard (or shortening). Truly the flakiest, most tender pie crust you'll ever try!

So here's what we're doing. We're making a lard and butter pie crust. Lard is not something that I tend to put in my pie crust because usually I share my pies and don't know that everyone would appreciate lard. But the combo of Lard and butter is truly the best pie crust there is and makes for very tender and flaky crust.

The secret to the BEST pie crust is to use cold ingredients and keep the pie crust cold as long as you can.

Even your flour if you can, put all your ingredients in the fridge before you make your pie crust.

Here's the thing, the salt in the pie crust is a tenderizer. You need it if you want a tender flaky crust. So don't skip the salt. In fact, I've heard from several people that tell me they skip the salt in their recipe because they are trying to cut back. But, the salt or the vinegar is a necessary part of the recipe. Don't skip it!

You need to have your butter and your lard, again we're using both, as cold as you can manage, so if you can cube it and put it in the fridge, if you can possibly put them in a freezer for like 10 minutes, that's your best shot.

The processor's going to do all of the work of the mixing, but we only want to mix the crust until it's like a coarse crumb. You do not want to overmix it or you will lose the tenderness of the crust.

Can I really use the food processor to do everything?

Mostly. But, you'll want to dump it out at the very end of the mixing process...

And then turn the mess out on to a floured surface to add a bit more water and mix it with our hands just until it comes together and forms a ball.

So yeah, a lot of people are going to be turned off about the lard and I totally get it. That's totally okay.

If you are interested, here is a quick history of lard: A bit about Lard.

So if lard is not your thing, which I understand, you can use shortening, but the point is the mixture of the different kinds of fat is going to be what gives you that super tender, super flaky crust.

And here at NellieBellie, we're all about the old vintage recipes, and lard is what they used for forever. This is one of the things my grandma used to do and I still do this recipe the old-school way but with a modern twist...the food processor :). She would be so jealous!

That, right there, is THE BEST Banana Cream Pie, by the way. Made with this crust. So good!

Now, you'll want to split your crust into two parts and roll them out just a bit, into a small disc. Wrap up the disc with saran wrap and put it in the fridge for at least an hour before rolling it out.

When you go to roll it out, let it come just up in temp enough that you can roll it. Remember to roll it from the center out and as little as possible. Put the rolled crust into a pie plate and put it back into the fridge until you are ready to fill it. Again, the super cold ingredients are necessary.

When it comes time to bake your pie, make sure your oven is preheated before you start it. Again, keep that pie crust as cold as possible before it hits the oven

This pie crust is so simple, tender, flaky, and old-fashioned...and now, with the use of the food processor, it's simply the best!

This, in my opinion, is the ultimate guide for perfect pie crusts and there is nothing I can improve one. So, head over to check out the Ultimate Tips... https://www.kingarthurflour.com/guides/pie-crust/ 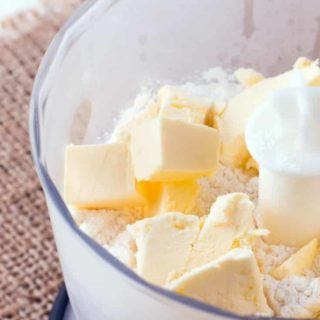 Other pie crusts to try: