Since we wrote this article, Amy has now opened her own shop! Go to Amy's Cupcake Shoppe online for all the details.

Cupcake shops were a fun fad, weren't they?  I'm not even sure if there are any still around...but they were great while they lasted.  Little adorable shops decorated in pastels and lace, with nothing inside but cupcakes and frosting.  Yum!  Amy's Cupcake Shoppe at first glance may appear similar to these, but don't be tricked!

Recently, we took some time to sit down with Amy and chat with her about her cupcakes.  We asked her to bring a few cupcakes with her so we could try them, since we don’t often have a reason to go visit her over in Minnetonka, and warned her that this was just a chance to chat.  If we didn't like what we tasted, we would have a nice cup of coffee and part ways.  Easy as that.  That's actually what we expected.  Isn't one cupcake place just like another?

Boy, were we wrong.  Instead of a nice cup of coffee and never seeing each other again, we decided to write about her.

And her amazing cupcakes.  And meet for coffee again.  And have more cupcakes.

Amy's Cupcake Shop is not just another adorable little cupcake place filled with processed sugars, chemical dyes, and factory-created fondants.  No sir!  Amy's cupcakes are adorable, and her cupcake toppers can stand their ground among any of those Cupcake Wars can dish out...but it's what you don't see that really sets Amy apart. 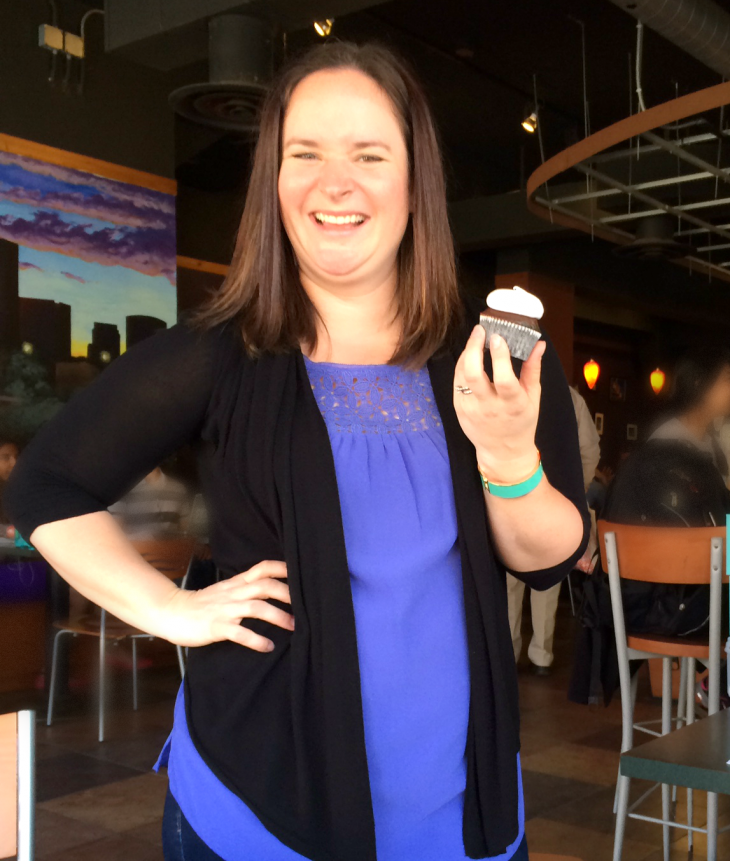 Amy is a true scientist.  She doesn't follow recipes; she creates them.  She can explain the differences between baking sodas and powders and dark cocoa versus black cocoa.  She understands the effect oven temperature has on her baking.  She knows which cupcakes benefit from vodka, and which are better baked with beer.

She taps her own maple syrup to go in her maple cupcakes.

She makes her own fondant, refusing to allow factory-created versions in her kitchen.

She creates caramel from scratch on her stove top so she can be certain of its quality and freshness.

She's even in the process of brewing her own beer to ensure only the best for her cupcakes.

She will even customize cupcakes at your request.

And even better than her incredible cupcakes is the fact that Amy makes you want her to succeed.  She is one of the sweetest people we've met in our work, but also one of the most committed to her craft.  She studies the art of baking like no one we have ever met.  Amy researches her recipes and her techniques.  She contacts experts to ask questions when a recipe just isn't working out.

She isn't just banking on a cute logo and decent cupcakes to make her stand out from the pack; Amy has worked hard to be able to create that lemon chiffon cupcake we will never be able to forget.

And all that hard work and perfectionism pays off when you bite into any of her cupcakes.  You can tell that they have been hand-crafted.  You have no doubt that the person who created them is a genius.  And you aren't shy about telling Amy that she has just given you the best cupcake you've ever tasted in your life.

Until you taste her next one…

Amy takes orders of all sizes, with her current minimum set at a dozen delicious cupcakes or macarons.  She offers delivery at a small fee to locations within a 15 mile radius of Minnetonka.  To find out if she is available to make cupcakes for your next party or event, e-mail her at amyscupcakeshoppe@comcast.net.  Gluten-free options are available.  Oh, and if you follow her instagram account @amyscupcakeshoppe, you'll see her great skills at making specialty themed cupcakes.  Seriously!

Do you have something in your area like Amy's Cupcake Shop?  What is it?