This chocolate beet cake is absolutely magical and one of our favorite homemade cake recipes. Not only does it not have any dairy or dairy products (we used coconut oil as a substitute for butter or oil in baking this cake), but it is made with an ingredient that gives it extra beauty and deliciousness: beets! Many vintage red velvet cake recipes contained beets because they help retain moisture in the cake while adding some bright color.

Before the days of food coloring, of course.


Though this super moist chocolate beet cake is chock full of healthy things like beets and cocoa, we’re not going to claim that it is healthy. It is, after all, a cake. But if you want a healthier version of your typical red velvet cake that doesn't use food coloring to get its color, this is for you.

I think of Chocolate Cake and a lovely man named Marvin that adored that cake. Wild Rice Soup reminds me of my Grandma and her cabin. Shortbread Cookies remind me of my sister Darla (who first introduced me to their buttery goodness in full force). And Cauliflower Potato Salad reminds me of my grandparents (who really didn't like cauliflower subbing out potatoes and were quite vocal!).

For instance, this beet chocolate cake would tell you that it is chock full of healthy beets, cocoa, and coconut without using a single egg or chunk of butter to make it delicious. It would tell you about it's raw sugar, it's coconut milk, and it's Bob's Red Mill flour. This beet chocolate cake requested only the finest ingredients and careful care. And gosh is it dang proud of itself! Rightly so. For my vegan readers, you will appreciate the accomplishment of a delicious fudgy vegan chocolate cake with a buttercream frosting that tastes sooo close to the real thing that you will swear you hear mooing!

What is the difference between chocolate and red velvet cake?

What type of frosting goes on red velvet cake?

Typically you'll find that buttercream or cream cheese frostings go on red velvet cake. Originally the recipe was made with ermine icing, which is a type of frosting made on the stove by heating ingredients with milk and mixing them with butter and sugar. It makes a lightly sweet, very buttery frosting that we highly recommend if you have the time.

Does red velvet cake need to be refrigerated?

Yes, red velvet cake needs to be refrigerated. Any cake with cream cheese frosting should be kept in the fridge. 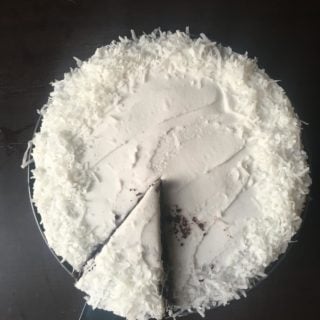 To make beet puree:
Roast beets in oven by cleaning them and wrapping them individually in foil. Bake on baking sheet for 45 minutes or until they are soft when a fork is inserted. Cool.
Use a food processor or blender to puree the beets, adding a bit of water or juice to help aid their mixing. Usually about ½ teaspoon of liquid per beet.