This cinnamon roll coffee latte is easy to make, at home, without an espresso maker. It uses good strong coffee and is the perfect weekend coffee treat with your favorite homemade cake recipes.

We just can’t get enough of coffee and lattes and all the espresso, around here. Probably because 14 months out of the year it’s snowing and cold, here in Minnesota. ❄️❄️

But we also love love love the warmth and coziness and community around the coffee culture. Coffee shops are just the coolest little places. All sorts of styles and flavors and buildings.

When we visit a new town, we head to their local coffee shop to get a feel for the local culture.

I’m trying to rationalize why I have made yet another latte recipe.

Honestly though, if I didn’t share this latte recipe with you I would feel like a very very selfish person.

Because this Cinnamon Roll Latte Recipe is just a bit classier than traditional make-at-home latte’s, thanks to the roasted cinnamon.

Why would you roast cinnamon?

To amp up the flavor. Honestly, there are mixed reviews as to if it actually DOES amp the flavor. I think it does. Sure, it could be in my head.

In my head or for real, does it matter? Roast the cinnamon.

After that, it’s just a matter of mixing your milk, vanilla, and sugar in with the cinnamon and heating.

Can I use skim milk for my latte?

Of course! In fact, this latte is made with skim milk. However, whole milk has a richer flavor and creates better foam. Oat milk is my favorite non-dairy substitution for homemade latte’s.

Can I use brown sugar instead of white?

Yes, I do often. BUT…the brown sugar doesn’t incorporate into the latte the same way that white does. This can make the sugar settle at the bottom of your pot. Bonus, you won’t have as much sugar. :)

Can I use my whisk instead of a milk frother to create the foam?

Ummm, yes. But gosh are you going to need to whisk alot! And you won’t get tight foam like a [easyazon_link identifier=”B01BY9RTNQ” locale=”US”]frother[/easyazon_link] can get. My advice is, if you want to make homemade latte’s fairly often…get a [easyazon_cta align=”none” identifier=”B01BY9RTNQ” key=”small-light” locale=”US”]. They are fairly inexpensive. Otherwise, go for the whisk method and see what you can muster up.

Hey, did you know that if you heat a bit of milk in a mason jar, close the jar with the lid and ring, and then shake that sucker up you will create a nice froth! This is my favorite method! 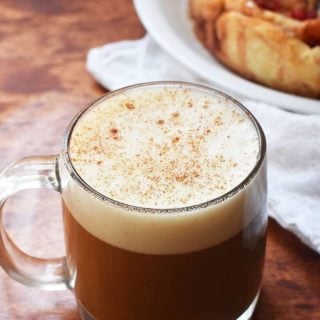 Save this recipe to your Pinterest board for later…

Other easy Coffee Recipes to try at home: