On the table in less than 30 minutes, this dairy-free chowder is full of perfectly cooked shrimp, sweet corn, and a creamy base packed full of easy flavor. Simple to make, easy ingredients, and a no-nonsense recipe.

30 days of our readers favorite soup recipes straight to your inbox. Plus over 15 homemade spice mix recipes. AND everything in a downloadable recipe book.

Shrimp corn chowder is the perfect comfort food that not only satisfies your cravings but also is quick and easy to make. It can be served as a main dish or a side dish, making it a versatile addition to your meal plan. Whether you're in the mood for something hearty and filling, or a lighter option, this chowder will not disappoint. With its delicious combination of tender shrimp, sweet corn, and creamy broth, it's sure to be a crowd-pleaser.

What makes a chowder a chowder?

A chowder, unlike a bisque, is usually made from milk or cream and thick and chunky with bits of potato, veggies, and meat (in our chowder the texture comes from corn and shrimp, the milk from coconut milk). A bisque, on the other hand, is smooth and creamy with little to no chunks.

What kind of shrimp?

You're going to want to start with raw shrimp to get the best results for this Shrimp and Corn Chowder. You can use fresh or frozen (thawed) shrimp. Either way, make sure it is rinsed, deveined, and tail-free before you cook it. I like to use medium when cooking for my family but often use small when cooking for other groups or small children.

Can I use precooked shrimp?

YES, you can use pre-cooked shrimp. If you do, add it into the pot at the very end of the recipe and skip putting it into the oil in the beginning of this recipe or you will get gummy shrimp.

If you don't have shrimp or don't like shrimp, but the rest of this Shrimp and Corn Chowder sounds delicious, try using sliced, smoked sausage instead. Or, keep it in the seafood family and use scallops, lobster, or crab meat.

What can I use instead of sherry?

Sherry provides the little bit of acid needed for this Shrimp and Corn Chowder. If you don't have sherry on hand, use another acid, like lemon juice, white wine, or vinegar (white vinegar, apple cider vinegar, white wine vinegar...I'm starting to sound like Bubba talking about all the types of shrimp in Forest Gump...you get the idea).

Can I use canned corn?

Good news! You can use fresh, frozen, or canned corn in your Shrimp and Corn Chowder. That makes it super easy to make this recipe with whatever you have on hand.

How to make Shrimp and Corn Chowder

This Shrimp and Corn Chowder is fantastic as is, but it also serves as an excellent base for you to use if you're feeling a little creative. You can add in some chopped veggies, like carrots, celery, or red pepper, when you're cooking the onion. Some people like to add chilis, diced tomatoes, or some greens, like kale. You might mix in some favorite herbs or spices. Or you might just like to top your chowder with some extras, like a little crumbled bacon, green onions, or cheese (if you and dairy are friends).

What to serve with Shrimp & Corn Chowder?

There isn't anything much better than a hot bowl of soup with some warm bread on a cold night. Or if you're wanting to make this Shrimp and Corn Chowder with some fresh sweet corn in the summer, I suggest pairing it with a simple side salad. It is delicious any time of year with some of your favorite roasted veggies on the side. Try it with some roasted or grilled asparagus!

You can store any leftover Shrimp and Corn Chowder in an airtight container in the fridge for 3-4 days. I recommend both storing and reheating the shrimp and chowder separately to help you avoid overcooking the shrimp, which leaves it tough and dry. Shrimp reheats quickly and the key is to not overcook it! 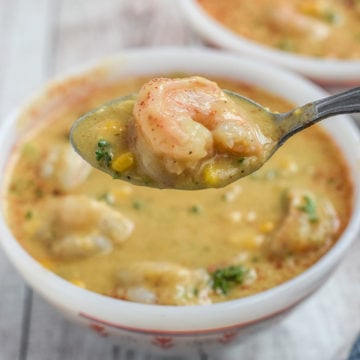 To save leftovers, remove the shrimp and store it separately from the chowder. This helps keep the shrimp from getting over cooked with reheating.

"The shrimp/corn chowder was yummy and actually didn't take too much longer than 30 minutes. I'm not much for Cajun flavor, but the combo of spicy and sweet from the corn and coconut milk was a perfect mix."

More about our recipe testing...